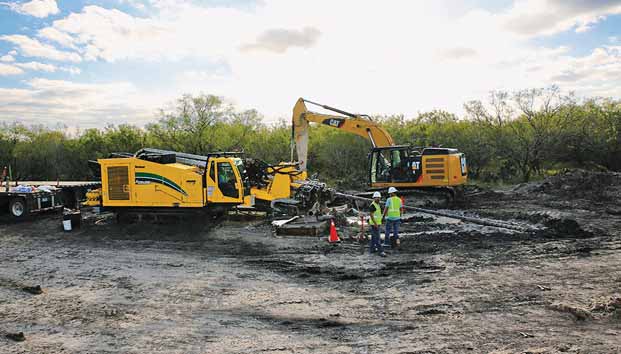 Think about some of the biggest challenges a directional boring crew may face on a job. There are constricted work areas. Obstacles like existing utilities and natural features such as bodies of water. Tough ground conditions. Weather. Tight deadlines. Dakota Utility Contractors Inc. faced all of these on a recent pipeline installation in Arkansas using horizontal directional drilling (HDD).

“This job was not an easy job by any means,” says Jim Watland, operations manager for the Texas-based company.

Here’s a partial list of some of the challenges the crews from Dakota Utility Contractors faced:

• Drilling in town, with some of that occurring in the backyards of people’s homes.• Constantly shifting soil conditions.• Crossing roads, railroads, waterways and wetlands and dealing with the different agencies who oversaw those areas.• Heavy rain that caused wet ground conditions for the first two months of the job.• A tight deadline made all the tougher by the weather.

Four Dakota Utility HDD crews worked through these issues while undertaking nearly 30 shots totaling approximately 33,000 ft to install a 12-in. high-pressure steel pipeline carrying transportation fuel. They started in mid-December and hoped to finish by the end of May. “What I’m most proud of on this project is the fact that we adapted and overcame all of the obstacles,” Watland says. “Our customer is extremely happy — pleased with our production, how we handled the project and how we got things done.”

Dakota Utility Contractors is located in the town of Ennis, Texas, on the outskirts of Dallas. The company has 15 HDD crews and does pipeline and utility installations.

Their flexibility has served them well. Traditionally, 40 percent of the company’s work has been on the utility side and 60 percent oil and gas. But when the oil and gas market started to suffer in late 2014, Dakota Utility Contractors was able to shift into more water and sewer work to fill that gap. Now, they’re seeing an uptick in pipeline jobs. On one day earlier this year, Watland had nine crews on oil and gas jobs and the rest on utility installations.

Watland, whose job is to oversee the 15 drill crews, says one of the biggest drivers of the HDD industry is growing environmental awareness. More project owners are planning projects using horizontal directional drilling instead of open-cut methods because HDD has less impact on the environment. But environmental concerns also have become a challenge for HDD contractors, according to Watland. There are growing rules and regulations on things like drilling fluid disposal and inadvertent returns. There’s also an increasing demand for accuracy when it comes to drilling. “We’ve got a lot tighter tolerances today than we did two, three years ago,” Watland says.

It’s trends like these that add to the degree of difficulty of an already challenging project like the one Dakota Utility Contractors recently tackled in Arkansas. The company was hired to install a transmission line for transportation fuel. The work was centered in Fort Smith in western Arkansas, with part of the pipeline going through an old military base that is now used as an Arkansas National Guard training facility.

The job was so diverse that Watland used four HDD crews and three different-sized rigs on the job. A 242,000-lb drill handled the longest bores, two 100,000-lb rigs did medium-length shots, and a 28,000-lb drill was used for road crossings. More than anything else, what made this project stand out was the number of obstacles and the ground conditions. The obstacles included wetlands, which are known for having diverse plant and animal life and are often the focus of conservation efforts.

There were four wetlands on this project, a couple of them under federal control, ranging from 400 to 1,000 ft wide. The work around them required extra caution to not damage the surface with equipment and manpower and to make sure the actual drilling did not disturb the wetlands. Watland says they had to watch their fluid pressure carefully and adjust the makeup of their drilling fluid to keep everything flowing correctly.

With this being an in-town project, there also were many bores in residential neighborhoods. In some instances, a drill was set up in a utility easement in a backyard. Considering this was a 12-in. pipeline and not a small fiber line, this created some challenges with the size of rigs needed to do a job. On one shot, the project owner wanted Dakota Utility Contractors to use its 242,000-lb rig, but it wasn’t feasible because it was a residential neighborhood and steep entry angle, so they used one of the 100,000-lb drills instead.

Watland started the project with three drills but called in the company’s Vermeer D100x140 Navigator HDD when increasingly difficult ground conditions caused issues for the project. The drill was used on shots ranging from 500 to 1,100 ft. Watland says the 20-ft rods on his two larger Vermeer drills were an advantage on the non-road bores, when the crew tracked downhole tooling with a wireline system. “That helps me a lot when I’m wire lining because you have fewer connections versus the 10- or 15-ft rods that come with the other rigs,” he says.

Soil conditions were another big challenge on this project. “It changed from bore to bore, and sometimes it changed throughout a bore,” Watland says. “We were on a 1,300-ft bore and the soil changed five times.”

About the only constant was the road bores, which were dirt. Everything else could be broadly categorized as rock, but it varied from shale to sandstone to coal to granite. The granite was a surprise after not showing up on the geotechnical investigation Dakota Utility Contractors had done. Some of it was as hard as 40,000 psi. The crew switched to a tungsten carbide insert (TCI) button drill bit and a TCI reamer to get through the hard rock. They also slowed the rotation of the drill.

The drill bits they used on other bores depended on the soil. In hard rock, they used the TCI button bits. In clay or shale, they used mill tooth split bits. The same was true when they backreamed: TCI reamers in hard rock and mill tooth reamers for other soils. The rock was so nasty in parts that it threatened to scratch the coating off the welded joints, so Dakota Utility Contractors at times drilled 20- and 22-in. holes for the product instead of the 18-in. holes they typically would for a 12-in. pipeline like this.

The project owner handled the utility locating, using vacuum excavators to pothole. Watland, as he often does, also talked with local sources. Dakota Utility Contractors rented a yard to store its equipment, and the owner had been in the area for 50 years and provided some insight on soil conditions and where there might be buried debris. Watland also came across an HDD crew doing a fiber project and asked them what they had encountered.

Dakota Utility Contractors used Baroid Industrial Drilling Products for its drilling fluid needs, but again, because of the changing soil conditions, the makeup of the drilling fluid depended on what the crew was encountering downhole.

The coal proved to be particularly challenging. The area they were drilling in is known for coal mines, and the crews ran into a type of coal known as lignite. It raised the pH level and diluted the chemicals in the drilling fluid. Watland had to consult experts and try different additives to override what the coal was doing to the chemicals.

Mud disposal was a big cost and inconvenience, something that is a growing trend in the HDD industry. A disposal site for liquids was a four-hour roundtrip from Fort Smith. For solids, Watland had to get dump trucks and haul the material two hours roundtrip. To give an example of the cost, two bores totaling 900 ft had dump fees in the five figures. Each drill had a reclaimer to try to minimize those costs and recycle drilling fluid.

On a job like this, planning is crucial. Dakota Utility Contractors often uses Vermeer Atlas Bore Planner® computer software to plot a bore path. They also use Google Earth to review a bore path. Once onsite, they survey all of their proposed bores and develop pre-bore plans for each rig. In Fort Smith, Dakota Utility Contractors dealt with everyone from local and federal agencies to private companies. “We’ve got railroads that we’re crossing. We’ve got state highways. We’ve got county roads. We’ve got federal wetlands,” he says. “So you’ve got all of these different agencies that have a say and have their own requirements.”

To top it off, the first couple months of the project were very wet. And project owners these days aren’t giving many breaks on deadlines because of bad weather. “Everything was soaking wet and we had to mat everything,” Watland says. “You’d drive a track hoe and it’d just sink.” The Dakota Utility Contractors crews were able to work through all these issues. “I take a lot of pride in keeping my customers happy,” Watland says, “and I think that’s what we were able to do.”