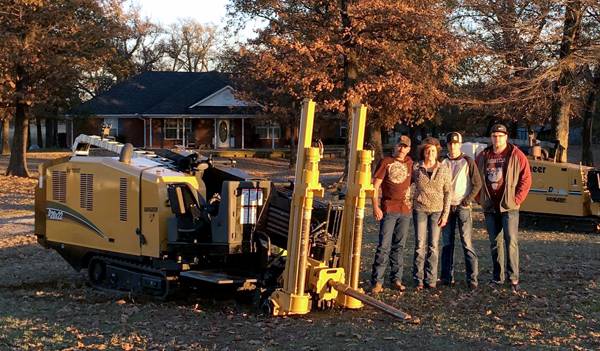 As a guy who used to work at a dairy farm, Jeff Wilson never imagined what a career in directional drilling would provide for him and his family.

Jeff owns and operates, Jeff Wilson Boring based out of Saltillo in East Texas. In business since 1997, they focus on the installation of water, sewer, electric and telephone lines. Hunter, Jeff’s son, rounds out their two-man crew while his wife Kim and other son Cody provide support.

Jeff bought his first drill rig – a D6 from someone who was selling a used machine. In 1999 he bought his first new Vermeer directional drill – a D16x20 from salesman Glen Tharp at Vermeer Equipment of Texas. Jeff ran that rig for almost 20 years –  racking up over 9000 hours. In late 2016, Jeff made the decision to upgrade, purchasing a new Vermeer D20x22 S3 from Ryan Floyd out of Kilgore.

“Ryan has been really good to work with. He has been there to help us out every time we have needed him. For a young guy, he has a lot of potential. The support we get from the Kilgore branch has been great.”

Over the past 20 years Jeff took on plenty of tough jobs with his Vermeer D16x20, and it completed many bores that it shouldn’t have been able to do. Jeff specifically remembers a couple of them including 200’ of 14” steel and 800’ of a 6” water line. His D16x20 just keeps showing up for work – which is why Jeff kept the old rig and will continue to put it to work if he needs to.

Jeff has been blessed with no shortage of work, and when it came time for him to upgrade his fleet, he knew he wanted another Vermeer rig as he said he’s “always been a Vermeer guy”. The new D20x22 S3 offered him more power in a similar footprint which he prefers.

So with plenty of work from local water companies, cities and municipalities, school districts and plumbers, Jeff is well positioned for whatever his future jobs hold. He said the toughest thing he has faced has been how many other utilities are now in the ground, and working around them, even in the rural areas.

Jeff told us that he never dreamed directional drilling would give him such a good life and said that he and his family are very blessed. Being his own boss for the last 20 years has been a great opportunity. When we asked what his business motto is – Jeff said – “While I have had my share of things go wrong, we just take everything as it comes, try to learn from it, and do better next time.”

With that mentality, it sounds like Jeff Wilson Boring will be working in the industry for a long time…

Holt first began his business renting a competitor’s equipment, but after a year he knew he needed to own his equipment for his company to become more financially viable. About four years ago he purchased a Vermeer S725TX mini skid steer from the Vermeer branch in Amarillo, Texas. He demoed the machine, liked it and enjoyed a 0% interest offer, which sealed the deal. The timing and deal got Holt in the door, but he’s stayed with Vermeer, not only because of the quality of the machine and flexible financing options, but the relationship he’s developed with his sales rep, Brody Hooper, and the service he’s received from the local branch.