Equipped to Do More Good in the Community

At Vermeer Texas-Louisiana, our yellow iron has far reaching effects, as evidenced by Remmington Holt, owner of Amarillo Land Services – a landscape and irrigation company in Texas. Holt has been in the irrigation repair and landscape lighting business, as a business owner, for more than five years. His small business has grown exponentially with the use of compact construction equipment.

Holt first began his business renting a competitor’s equipment, but after a year he knew he needed to own his equipment for his company to become more financially viable. About four years ago he purchased a Vermeer S725TX mini skid steer from the Vermeer branch in Amarillo, Texas. He demoed the machine, liked it and enjoyed a 0% interest offer, which sealed the deal. The timing and deal got Holt in the door, but he’s stayed with Vermeer, not only because of the quality of the machine and flexible financing options, but the relationship he’s developed with his sales rep, Brody Hooper, and the service he’s received from the local branch. 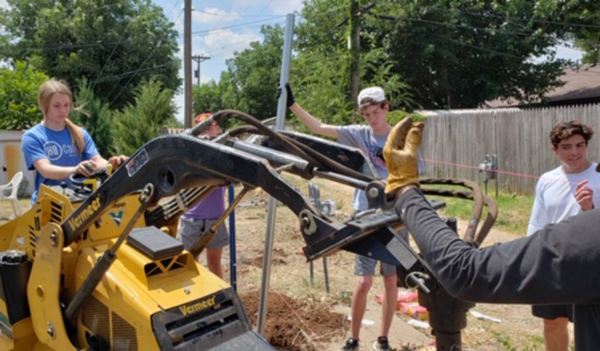 Holt has his eye on a Harley power rake attachment, hoping that it will give him more versatility, and he is also considering upgrading his yellow iron in the future. Even though the mini skid steer is currently his only piece of equipment, he says it’s integral to his business. He remarked, “My business is small, so the skid steer essentially acts as an employee. My wife has even said, ‘You can sell anything, but you cannot sell that mini skid!’”

Not only is Holt loyal to the Vermeer brand for hardware, he brings his machine in for routine service maintenance and, in a few cases, major repairs. Because he’s pretty handy himself, he often fixes minor repairs himself using genuine Vermeer parts. He recalled, “One time I got the wrong part, and Casey [Jordan, Amarillo branch manager] got the right part and drove it out to me – after hours.” When his machine is in for service, Holt never has to worry about a thing, his sales rep makes sure that he is advised of the status and the job is taken care of to completion.

Because of his success, Holt is able to pass some of it along. During his busiest season, he allows St. Stephens United Methodist Church in Amarillo to borrow his mini skid steer for their Change Your World program. On one weekend in the summer, adults from the church lead groups of 6-10 youth to complete more than 80 home improvement jobs for underserved communities. They do things like bathroom renovations, cleaning, and helping install new carpet. Several teens used Holt’s machine to help prepare for the installation of a 160-foot fence. With his supervision, the youth removed dead trees and shrubs. “They were able to take on this job because of my Vermeer,” said Holt.

In a society where negative stories often receive the limelight, it’s welcomed change to see people helping their neighbors, and it’s a privilege to know that Vermeer has equipped them to do more and effect change for their communities.