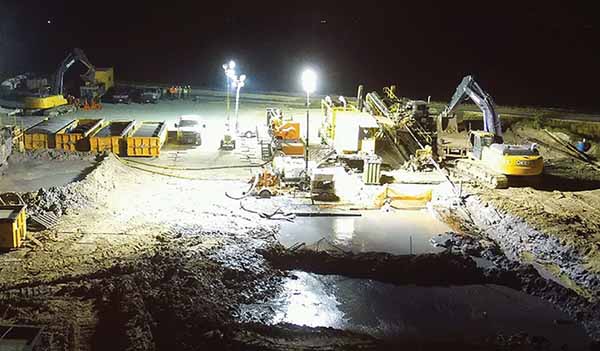 Long, deep directional drills beneath bodies of water are challenging for horizontal directional drilling (HDD) contractors with the equipment and personnel able to perform this type of work, and each project has elements that set it apart from others. Bobcat Contracting LLC recently installed 18,000 feet of pipeline to carry crude oil, including a 6,000- foot HDD crossing under the Corpus Christi, TX, ship channel. The project was owned by Magellan Midstream Partners, L.P.

The Corpus Christi Ship Channel is a 45-foot deep expressway to the Gulf of Mexico for both boats and fish. Extending more than 20 miles from the Port of Corpus Christi to connect with the Aransas and Lydia Ann channels near Port Aransas, the channel then goes through the pass between Mustang Island and St. Joseph Island.

“The long pilot bore got off to a good start,” said David Latimer, Bobcat Contracting estimator/project manager. An American Auger 1 million-pound rig was used to drill the pilot shot. The entry point was near the water, adjacent to a road and had plenty of space for the drill rig and support equipment. The 10 5/8-inch pilot bore proceeded down at an angle, leveled off a depth of 180 feet under the ship channel and proceeded to the exit point.

The pilot hole was completed in 14 days, but difficulties arose with backreaming to enlarge the pilot hole.

At 1,700 feet into the reaming process, a frac-out occurred. After every effort to stop it failed, the decision was made to shift from pull to push reaming. That was initiated from the entry point with the 1 million-pound drill rig. The push ream proceeded for 3,000 linear feet before the drill string and reamer became stuck in the hole.

When the HDD contractor was unable to free the pipe and reamer with the drill unit, a 1-million-pound hammer was added. In addition, a 330,000-pound American Auger drill was brought to the exit side of the hole to push. But even with all this equipment working at the same time, the drill string and reamer could not be moved.

In such situations, the hole may be abandoned and a new bore made adjacent to it. However, in this case, the job would have had to be re-permitted through the U.S. Corps of Engineers, taking as long as 45 days.

“That couldn’t be done,” Latimer said, “because it would cause us to miss the contract’s completion date. Liquidated damages would be assessed for each day past the deadline, and the daily cost would be substantial.”

Hard Rock Directional Drilling was called in to retrieve the pipe. Magellan and Bobcat had considered running a donut setup typically used for fishing HDD pipe. This involves welding two rings of pipe – donuts – to the side of drill pipe with water jets on the pipe as it is slid over the stuck drill pipe downhole, using the donuts as guides. The drilling mud washes over the stuck drill pipe to break it free.

“But the hole had not been completely reamed, and a donut could not pass through un-reamed portions of the pilot hole,” said Leo Aguirre, HardRock’s big rig superintendent.

HardRock brought in a 500,000-pound pullback Vermeer D500x500 and started drilling from the exit side next to the stuck drill string.

“We drilled to approximately 2,000 feet and started getting a lot of resistance, so we decided to trip out and move the drill unit to the entry side,” said Baker.

“We worked from the entry side for a couple of days and decided to bring in a second rig to work on the stuck drill pipe from both sides at once. We brought in a Vermeer D330x500 with 330,000 pounds of pullback and set it up on the exit side. When we reached 3,000 feet on the exit side and 1,700 feet on entry side, we got drilling mud flowing from entry side to exit side,” he explained.

Once the pipe was free, Hard Rock trailed rods until the previously stuck reamer exited. At that point, backreaming was resumed. The pipe pulled in from entry to exit in four days, and the HDD segment was completed prior to the deadline.While hole condition is the key to not getting stuck, unforeseen things can happen to anyone at any time.

“Unfortunately in the HDD business, it’s not a matter of if, but when,” Baker added. “Everyone has been stuck at one time or another. It takes finesse, muscle and luck to get free. Luck is the cheapest, so I’ll take that any day.”