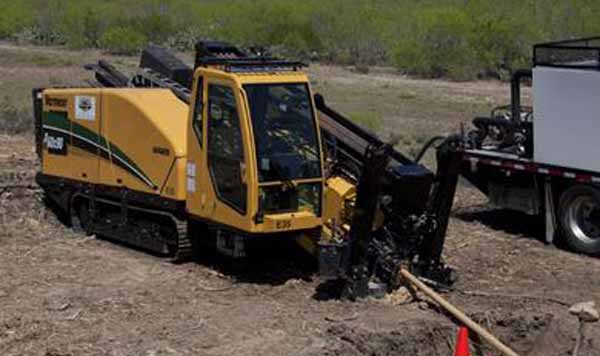 The pipeline infrastructure that currently exists in South and West Texas lacks the capacity to keep pace with production transport demand. As a result, drilling companies are scrambling to secure efficient, reliable pipeline installation contractors to expand the present network. The situation is either a frustration or an opportunity, depending on your position.  For the dozens of oil and gas interests struggling to get product to refineries, the inadequate infrastructure is taking an economic toll; while the present condition is a boon for companies like Hard Rock Directional Drilling that, at last count, had up to 11 crews positioned at various sites in the Western and Southern regions of the Lone Star State.

Hard Rock Directional Drilling was started by experienced drill operator Robert L. Myers and his wife, Angel, in 2003 with one machine — a leased Vermeer® D80x100 Series II Navigator® horizontal directional drill. Today, less than a decade later, the company has grown to more than 80 employees and a fleet of many machines, including 11 Vermeer drills. In 2011 Hard Rock surpassed the 1 million-foot mark (304,800 m) of pipe installed and is currently on track to surpass previous annual installation distance records with more than 130,000 feet (39,624 m) of pipeline — exclusively by HDD — completed in the first quarter of 2012 alone.

The long-range energy economic forecast is also encouraging. So much so that Hard Rock recently expanded on a 7-acre (2.8 hectare) site near Pearsall, Texas, just southwest of San Antonio, and constructed a 12,000-square-foot (1114.8 m2) building to house additional drills and equipment.

“It’s a great opportunity right now,” Myers says. “The economic boom in our area is just unbelievable. There are upwards of 275 oil well drilling rigs running every day in the South Texas region alone. There’s a new Shell plant starting up in West Texas, so we’ve also migrated out there. The drilling activity is very concentrated, much of it within our back yard.”

As oil and gas well drilling operators have become more efficient so have demands placed on pipeline installation contractors by the dozens of energy interests represented throughout the region. With the average length of time required to drill an average-depth oil well now within the two to three week range — and likely 300-plus drill rigs scattered throughout the South Texas region alone — oil companies have stepped up expectations for getting transport infrastructure in place. As a result, pipeline contractors have become more judicious; not only in their approach to installation methodology, but also in expanding the breadth of services they offer.

“My business philosophy is that I want Hard Rock Directional Drilling to be a little bit different than everybody else,” Myers says. “We are equipped for production. That means giving our guys in the field the right tools and equipment to be a little bit better and a little bit faster than everybody else. So when new equipment is introduced like a drill that has what it takes to make that happen, I take a long, hard look. It also means knowing the capabilities — and limitations — of existing machines in your fleet; and matching those with the rigors of specific jobs.”

For many years, the workhorse among all of Myers’ directional drills was the Vermeer D36x50 Series II Navigator drill; as evidenced by the number (he has five) among his fleet of equipment. And while he is still an adamant supporter, Myers has discovered a new drill on the block; a machine with a few additional features and the power to meet the increasing demands and changing infrastructure needs of the region.

The new addition to Myers’ fleet is a Vermeer D60x90 Navigator drill equipped with quick-change drill stem rod box that reduces the need to manually load drill rod. The thrust, pullback and spindle torque of the D60x90 drill has also helped Myers’ crews increase production rates; especially with larger pipeline diameter sizes — from 12- to 24-inch (30.5 to 61 cm) — and with steel fabrications.

“The gear-type rod loader system makes it a very streamlined, efficient machine with lots of power,” Myers says. “Our crews can complete a 1000-foot (304.8 m) bore installing 12-inch (30.5 cm) steel pipe in three days, compared to the four days it had been taking using a smaller machine. So, we gain a full day in our overall production rates.”

The new addition to Myers’ fleet was recently put to the test on an oil pipeline job of 110 miles (177 km) that involved upwards of 300 separate trenchless installations. Ground conditions were all over the board — clay, sand, rock, caliche; nearly every soil type imaginable — and according to Chris Jones, sales representative with Hard Rock, the conditions changed approximately every 20 feet (6.1 m) or so. “We’ve done everything from 20-foot (6.1 m) bores beneath roads to a 3000 foot (914.4 m) shot in an environmentally sensitive location,” Jones says. “The bores varied a great deal. Thorough preplanning and selection of the right equipment have been critical to maximizing efficiencies on every bore.”

Mud motors are used frequently, and several types of tooling are being employed with most reamers fabricated in advance by Myers’ experienced team of tooling experts. “We use our own tooling,” he says. “We know the territory, we know the conditions and we know what works. Our ability to adapt is something we pride ourselves on.”

In addition to emphasizing the importance of drill selection for streamlining pipeline installations, Hard Rock Directional Drilling has also expanded the breadth of project management service offerings. Once awarded a job, projects are logged on a planning schedule and individual internal project management teams are assigned. The team evaluates every aspect of each job — a service Myers refers to as the total HDD package — including site analysis, soil sampling, drill and drilling fluid selection, bore path mapping and estimated completion times.

“We’ve developed a total HDD turnkey package,” Myers says. “We supply the track hoe, surveying; basically all components. This allows contractors to concentrate on their job and focus on getting the bulk of the pipeline installed. We’ll concentrate, as a company, to come in and take care of everything from the HDD perspective. So when the contractor’s trenching crews come through, they’re ready to tie in. The trenchless installations are completed in advance. This really streamlines the process.”

“Right now, the oilfield and pipeline companies are very demanding … and with good reason,” Myers says. “These guys are production-based; expectations that are a good fit for us. Hard Rock is also a production-focused contractor. When we take on a job, we go from point A to point Z and try to figure out how we can get product in the ground more efficiently, without sacrificing quality or safety. The D60x90 Navigator drill helps us accomplish that.”