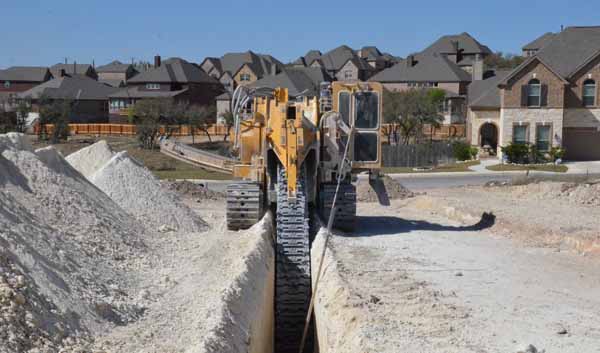 Set among rolling ranchland and majestic live oaks in the limestone-laden terrain of Texas’ famed Hill Country, San Antonio-based contractor SACC, Inc. enlisted a trio of Vermeer track trenchers to carve an intricate network of roads and utility lines that now serves as the infrastructure for an exclusive residential community. But the challenges facing the milling and trenching experts with SACC who tackled the project were as numerous as those presented by the sculpted fairways and manicured greens of Dominion Country Club; the prestigious golf club located nearby for which the development is named.

“It’s easy to be fooled by the landscape and rolling topography,” says Jason Merck, who along with his brother, Jerry, co-owns SACC, Inc. “Just below the surface is rock — hard rock — of the limestone variety. Milling and trenching through Texas limestone is no picnic. It takes operator patience and know-how; and tough equipment. Fortunately we’ve found both.”

Founded by Jason’s great grandfather — Gerald “Jerry” Merck; a Texas native and construction pioneer who recognized the vast potential in real estate development at the time — SACC, Inc., along with companion company Legacy SiteWork L.L.C., are leading residential development contractors specializing in residential development and site preparation. The company’s role in The Dominion project was to convert the undeveloped ground into a network of roads and water and sewer lines to accommodate the 60-plus lots platted for the new luxury gated community. On the surface, the task sounds fairly routine, right? But it’s what lies below the surface that made this project so challengingly unique.

“Getting everything down to grade was very difficult in the sloping, rocky topography,” Merck says. “The milling component of the job was tricky. It wasn’t like it was just a series of straightaways. The development was platted with curves and arcs designed to complement the sloping terrain and accentuate views for the residences. Milling curves on slopes through Texas limestone and keeping on grade is no easy task.”

“There were places where we needed to mill down quite a few feet to meet the grade necessary for gravity flow sewers,” says Merck. “The trenches for all of the wet utilities — water, storm and sanitary sewers — were cut directly beneath the roadways as specified in the plan. The challenge was to preserve as much of the natural terrain as possible to maximize views for the residents; which required some additional road milling to accomplish the grade needed for gravity flow.”

As if the limestone weren’t challenge enough, Merck’s crews encountered several impediments along the roadway milling routes including porous limestone underground aquifers, bird habitats, flint and a variety of related “sensitive” zones. Dust control was a huge concern; especially given the environmental sensitivities of the area and the very dry working conditions. “We really had to watch our dust control with how hot and dry it was at the time,” says Merck. “Keeping water on the trenching boom was critical.”

Working within the parameters of local, state and federal environmental guidelines was also a critical component. The entire area is situated above a huge underground aquifer with caves and openings that would need to be addressed before milling and trenching could commence. “If we came upon an aquifer, we just jumped ahead while the geotech crews came in and completed their assessment,” Merck says. “The caves and opening would need to be filled before we could proceed in order to maintain the environmental integrity of the aquifer. This often required truckload after truckload of gravel and rock. We hit some massive ones.”

Leading the parade of track trenchers was a Vermeer T1055 Commander® 3 tractor with a Terrain Leveler® attachment used to chart the course for the roadways; followed by a T1155, T1255 and another T1055 Commander 3 tractor with trencher attachments that were used to cut three separate trenches — 15,000 feet (4572 m) total — one for each of the wet utilities including water and storm and sanitary sewers. Strict adherence to grade was required.

Given the tough milling and drilling conditions, trencher maintenance was especially important. Merck credits the conviction of the crew with keeping the trenching attachments in tip-top shape and operator experience with knowing just how hard to push the machines. The corresponding result was production rates that exceeded expectations and projections, especially given all of the varying obstacles and impediments encountered by his crews operating the Vermeer equipment.

“There is a fine line between pushing it and overdoing it,” says Merck. “Our trenching and milling operators are very experienced in these conditions, and have a great sense of feel for just how much they can safely get from a machine. Vermeer equipment is tough — especially in rock — which made possible the 300 to 400 feet per day (91.4 m to 121.9 m) production rates we were able to realize.”

Merck ran 16-foot (4.9 m) trencher booms for the majority of the job; and on several occasions along the route needed every foot of the depth in order to make grade. In fact, at a few places along the route where the slope of the terrain extended beyond that depth, additional milling was necessary to accommodate the deeper trenching needs. At an average width of 2-1/2 feet (76.2 cm) to accommodate the 8-inch (20.3 cm) sewer lines and 12-inch (30.5 cm) water lines, more than 25,000 yards of rock was excavated to complete the 60-acre (24.3 hectare) site.

Where the roadway routes intersected, it was necessary for Merck and crews to install box culverts to direct the flow of storm water drainage. Each culvert — measuring 5 feet by 4 feet (1.5 by 1.2 m) — was cut into the rock using the track trenchers and a process Merck describes to as ribbon cutting. “The widest we had to trench was to accommodate a concrete box for culverts measuring 5 feet (1.5 m) wide so the trench leading up to those ending up being approximately 8-1/2 feet (2.6 m) wide. This required ribbon cutting through the rock.”

“The biggest challenge was definitely the topography,” Merck says. “This area is known for how hard the rock is. You’ll catch flint in some of the stuff; and mixed with the limestone, you can burn through teeth in a hurry if you don’t know what you’re doing, and don’t take the proper maintenance precautions. We learn something on every project; out there, we’re continuously learning the rock. We’re going to have much of the same on our next project, so what we learned on the top of The Dominion we’ll apply to the next development”.

“Our guys are continuing to sharpen their rock trenching and milling skills; learning how to operate the equipment most effectively and efficiently,” Merck says. “It all comes with experience; a sense of feel and knowing exactly what the equipment can handle.”

The Dominion development project was completed in six to seven months; a time period Merck and crews were happy to achieve. “Given the conditions and the many challenges in addition to the rock, we’ll take those production rates any day.”