“We’ve got the majority of our smaller rigs, 40,000-pounds (18,143.7-kg) or less, working on more fiber jobs this year than in previous years. Then there’s the Vermeer D220x300 S3 Navigator® horizontal directional drill (HDD) that just wrapped up a water job in Frisco, Texas, and is now working a water line relocation project in Rowlett, Texas,” explained Aaron Graff, president for Dakota Utility Contractors Inc., when asked if his 21 HDD crews were keeping busy this year.

The fact is, since starting Dakota Utility Contractors in September of 2000 with his dad and wife, Aaron has had to work extremely hard to get his business to where it’s at today. “We started with a used Vermeer D24x40A Navigator® HDD that we bought from the Vermeer Texas-Louisiana dealership in Irving, Texas, and headed straight to Indianapolis, Indiana, where we worked through the rest of year. After that, we headed to Kentucky, then spent some time up north before settling for a bit in Florida doing mostly fiber work,” he explained. “After a couple of years of doing that, we landed our first steady customer in Texas, where we are today. Over the next couple of years, we hired a few employees and added a couple of utility drills to keep up with the fiber work. Then, around 2008, we bought our first ‘big’ rig — a Vermeer D80x100 Navigator® horizontal directional drill — and started going heavier on the pipeline side.”

Today, the Ennis, Texas-based utility and pipeline directional drilling company splits its time between small-diameter fiber and electrical installs and large-diameter gas, water and sewer work. Aaron said their team has a lot of dedicated resources for doing large-diameter and pipeline work, but he never wants to forget where the company got its start. “Electrical and fiber companies gave us a chance when we first opened our doors, so it’s very important to me to make sure that, even though we do a lot more than large-diameter work today, we make it a priority to continue provide quality service to those organizations.” 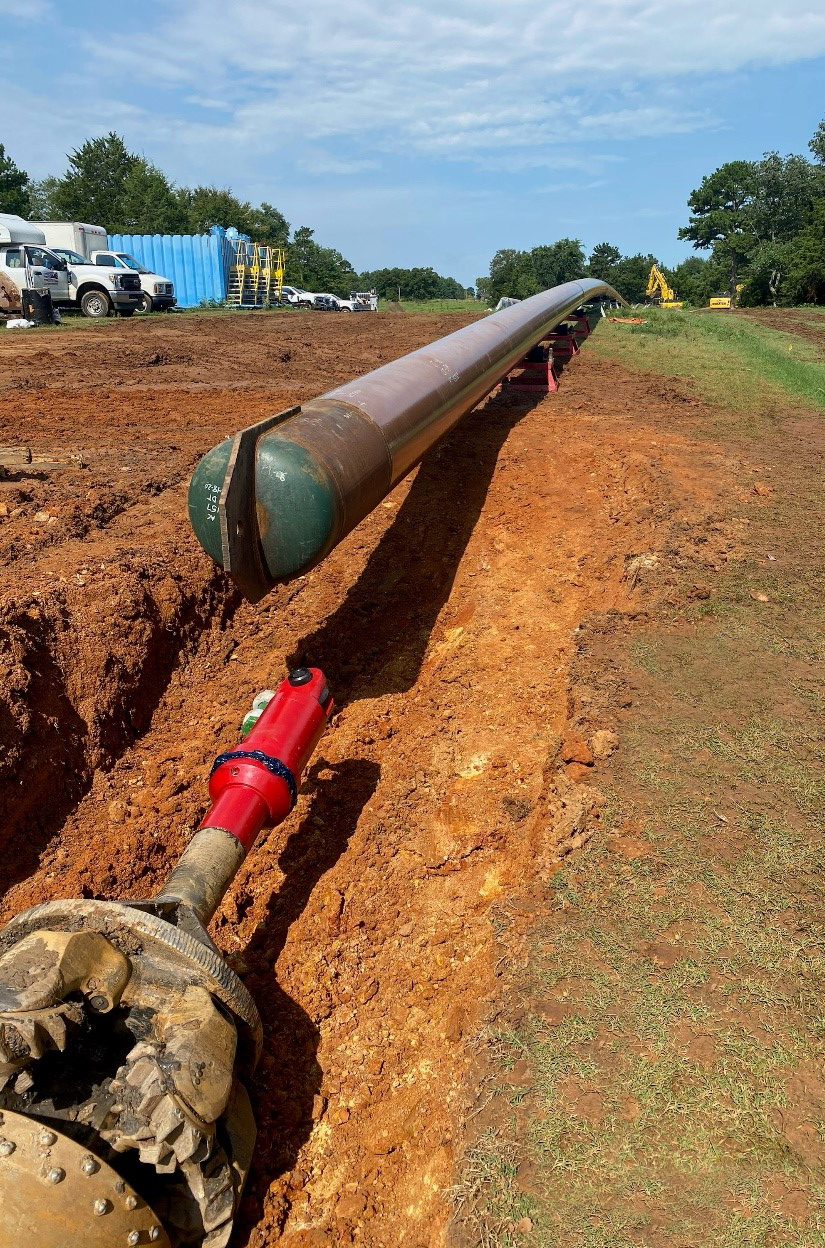 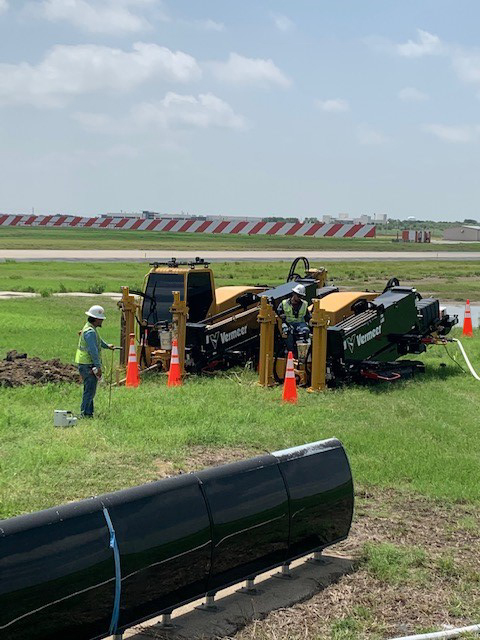 Aaron also credits having a diversified customer base for maintaining a steady stream of work. “When the pandemic hit, oil and gas pipeline work fluctuated around the country,” he said. “We’ve been fortunate to have other projects outside of the oil and gas market to keep our team busy. Utility work is going strong, and we’ve been working with several municipalities to install water and force sewer lines.”

For one of Dakota Utility Contractor’s crews, they have been doing large-diameter forced sewer HDD work in downtown Frisco, and water line relocation in the Dallas suburb Rowlett.

Like many cities throughout Texas, Frisco is growing at a rapid rate. To meet the rising needs of new residents and businesses, it was time to increase the capacity of the the city’s sewer system — a 20-inch (50.8-cm) HDPE forced sewer main right through the median of one of the city’s main traffic arteries.

A good portion of the the new sewer line was installed using open-cut methods, but HDD and auger boring was employed in the most congested areas, where intersections could not be shut down. Dakota Utility Contractors got the call to perform a 2,400-foot (731.5-m) bore stretching several city blocks, near several other buried utilities and crossing several intersections.

“On the entry side of the project, the site is surrounded by housing subdivisions, and on the exit, there are restaurants, gas stations and retail stores,” said Aaron. “Also, many of the area’s other utilities were buried in the same stretch of ground. So, we needed to be diligent with our planning and then execute that plan perfectly.”

To begin, Dakota Utility Contractors sent out its two in-house wireline engineers to survey the area and identify above and below ground obstacles. They mapped out the bore path, took soil samples, came up with a plan and submitted it all for approval. After that, the drill crew went to work.

With limited space between roadways, and the 2,400 feet (731.5 m) they needed to drill out, the team determined the Vermeer D220x300 S3 was the best machine for the job. “For a large directional drill, that machine has a narrow footprint and plenty of power, which is exactly what we need for these types of projects in the city,” explained Aaron. “We also brought in a mud recycling system, a pump, generator and excavator on the entry side of the job.”

The bore plan called for the crew to drill deep — 48 feet (18.6 m) below the surface, to be exact. “In populated areas, inadvertent returns can lead to more issues than in more rural areas,” explained Aaron. “Boring deeper gave us a lot more ground cover to help avoid this from happening. And, the ground was a soft clay, so keeping our returns was a huge battle for us.”

Dakota Utility Contractors employ mud engineers to handle the drilling fluid management side of the operations on big jobs like this one. The challenge on the Frisco job was coming up with a way to maintain the drill path’s integrity, keep the clay from balling up and causing an inadvertent return, and minimize flow to the exit side of the bore.

“We were crossing several intersections, so we couldn’t pump slurry back to the mud recycling system. It had to be hauled with vacuum excavators,” explained Aaron. “To delay flow to the exit side, we performed the pilot bore and the first couple of reamer passes without punching out, so the fluid only had one way to go. Our onsite mud engineer monitored our fluid returns to make sure we were getting the majority of it back and made adjustments to our drilling fluid mix when needed.” 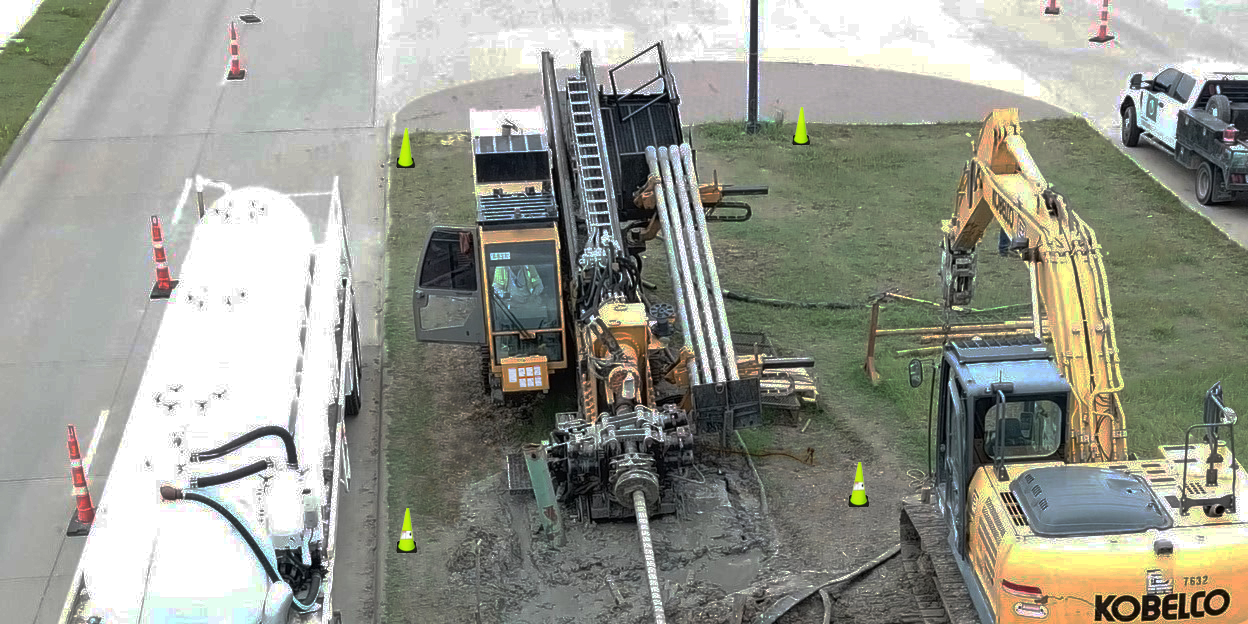 Before pulling back the 20-inch (50.8-cm) HDPE pipe, the bore was opened up to a 30 inch (76.2 cm). After the pilot bore, the crew push-reamed with a 18-inch (45.7-cm) mill-tooth, roller-cone reamer. After the first pass, they tried to step up to a 30-inch (76.2-cm) reamer, but the returns were too thick and the clay was balling up, which was pulling down their rate of returns. To avoid a potential inadvertent return, they swapped out that reamer with a 24-inch (61-cm) reamer and then stepped back up from there. On the final pass, the crew punched out and made two swab passes before pulling back.

Aaron said from start to finish his crew was on the job for less than a month and were able to successfully avoid any inadvertent returns.

While one team was wrapping up the Frisco job, another one of Dakota Utility Contractors’ crews performed a 1,400-foot (426.7-cm) pilot bore in Rowlett for a water line relocation project with a Vermeer D100x140 S3 HDD. Plans to expand the nearby road from two lanes to four prompted the project, and the site sat right between a causeway and a lake.

The D100x140 S3 would later be swapped out with the larger D220x300 S3 to ream and pullback the 30-inch .500 (12.7 mm) wall steel casing. Aaron said that on several large-diameter projects under 2,000 feet (609.6 m), they use their small drills to do the pilot bore and make a reamer pass or two because it helps reduce their operational costs. Then when it’s time to open the hole wider and pull, they move in the D220x300 to complete the job.

With water on both sides of the jobsite, the ground conditions were a combination of really wet sand and clay. This  pairing kept the project’s mud engineer busy changing the fluid mixture through the bore’s length. After punching out on the pilot bore, the crew ran a tail rod throughout the reaming process.

“The ground conditions made everything touch-and-go,” said Aaron. “In the clay, we pulled and pushed ream, and then in the sand areas, we would go all the way through. We had to fight conditions the whole way. We were all anxious to get this one done.”

As all of Dakota Utility Contractors’ crews crisscrossed the country performing utility and large-diameter bores, Aaron took a minute to reflect on what got the company to where it is today. “We’ve been working with the same core customers almost from the beginning. They know us and trust that we’ll always do an excellent job for them. We have also been successful at retaining our talented crew members and have several celebrating their 10-year and 15-year anniversaries.

“And finally, we’ve invested in quality equipment and have great partnerships with the people at the dealership,” he finished. “We purchased our first drill from Vermeer Texas-Louisiana, and they’ve been supporting us ever since. All of those factors have taken us to where we are today and will be tomorrow.”