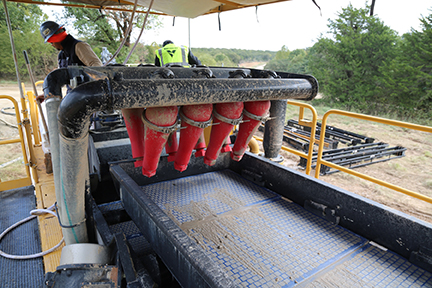 Scott Andrews, owner of S & J Contractors of Winnsboro, Texas, has been working in the pipeline industry for 30 years. During that time, his company has weathered through lean years and prospered during boom years. Andrews believes there is a natural ebb and flow in the industry and the best way to get through the peaks and valleys is having a team that can handle every aspect of constructing a pipeline, including doing a good job of allocating people and equipment on current projects.

Today, S & J Contractors employs more than 160 highly skilled individuals, who on a daily basis can be found doing pipeline construction, compressor installations or plant work. The company is a full-service operation from digging ditches, stringing pipe and welding to clearing right of ways and restoration work. In fact, until recently, the only thing S & J Contractors would even consider subbing out is horizontal directional drilling (HDD). That all changed in the last year when Andrews recently made a significant equipment investment so S&J Contractors can offer their clients a turnkey solution.

According to Andrews, his company is no stranger to doing trenchless pipeline construction installation. “We used to run several large maxi rigs until around a decade ago when there was a dip in work in Southern Texas,” he explained.

“We leaned up a bit as a company and decided that HDD was an area we could use a subcontractor on if we needed to. We did, however, continue to invest in a few smaller HDDs for doing smaller-diameter bores.”

An increasing workload for HDD work in Oklahoma and New Mexico has led S & J Contractors back into larger-diameter trenchless work within the last year. “We’ve had a lot of drilling work coming in lately that has had some pretty tight deadlines; we just couldn’t afford to be waiting on subcontractors,” Andrews explained. “So, I gave my friend, Ray Miller, with Vermeer Texas-Louisiana a call to see how quickly we could get a horizontal directional drill and reclaimer on our jobsite. He got us what we needed, and he got it all done quickly.”

Andrews invested in a new Vermeer D100x140 S3 Navigator® horizontal directional drill and a Vermeer R250C reclaimer. The equipment combination, along with building a team of experienced operators and locators helped S & J Contractors quickly transition to begin doing large-diameter pipeline boring projects on their own.

Deploying an HDD crew
S & J Contractors’ HDD crew got to work after adding the Vermeer HDD and reclaimer on several boring projects in Texas and New Mexico. After that, they made their way up to Oklahoma to help with a new pipeline system being constructed by Valiant Midstream, LLC that would span Hughes, Coal and Atoka counties and portions of Pittsburg, Pontotoc and Seminole counties. In total, the Valiant system will have approximately 150 miles (241.4 km) of pipeline when completed.

On this project, S & J Contractors was the HDD subcontractor — an unusual role for the full-service company. Leading the crew was HDD supervisor, Derl Stringer, who has served in many positions during his 15 years with the company. “Even though we didn’t run larger maxi rigs for a few years, this new Vermeer HDD was pretty intuitive to transition to,” he explained. “The controls are just like the ones on smaller Vermeer HDDs, which helped us to be productive right out of the gate.”

Battle rock and weather
To get the new pipeline up and running, all of the contractors working on the new line needed to work as efficiently as possible. Adding to the tight timeline was an unseasonably high amount of rainfall and challenging terrain.

Most of the bores that S & J Contractors were responsible for were right outside of McAlester, Oklahoma. “We’re extremely familiar with the area, so we knew the ground conditions we would be operating in were rock and sand, but it was the weather that was unexpected,” said Stringer. “There were days where the whole area was flooded and many other days where drilling was about the only type of work that could be done. Through it all, we managed to stay on schedule.”

The hard rock and sandstone to clay and sand ground conditions were challenging for the crew to navigate. “There aren’t too many flat spots in and around McAlester,” explained Andrews. “In some areas, the grade can change up to 40 percent almost instantly. In those areas, drilling makes a lot of sense. We also set up and bored under several creek beds.”

Dialing in the perfect setup
The demanding soil conditions meant that using a drilling fluid motor on the Vermeer D100x140 S3 Navigator HDD is essential. After completing the pilot bore, the S & J Contractors crew would typically make up to three passes with various-sized hole openers. “On the 20-inch (50.8 cm) lines, we would start with an 18-inch (45.7 cm) reamer, then step up from there,” said Stringer. “The final pass was usually with a 30-inch (76.2 cm) reamer.”

Choosing the right tooling was straight forward compared to getting the drilling fluid mixture dialed in correctly. “One minute we would be drilling in solid rock and then pop out the other side in sand,” Stringer explained. “We had to keep a real close eye on things and make adjustments to the mixture as we went.”

The crew was running around 150 gallons per minute (567.8 L/min) of drilling fluid and used the Vermeer R250C reclaimer to help reduce the overall amount of water they used, as well as reduce the amount of drilling additives needed.

“The Vermeer reclaimer helped save us time and expenses,” said Stringer. “I can’t even imagine how much water we would have had to haul in without it. It was convenient to dial in and make adjustments as we changed up our drilling fluid mixture.”

Andrews also said that using a reclaimer helped reduce their investment in material. “In a lot of these rural areas, we had to add a lot of soda ash, which can get expensive,” he said. “Reclaiming the fluid we use means we’ve been able to use less ash, less drilling fluid additives and much less water. Plus there is much less drilling fluid that we have to haul off after a bore is completed.”

Documenting bore profiles
Having operated smaller drills for years, a best practice that Stringer and Andrews have brought to its maxi rig operations is creating as-built bore profiles in the field using their DCI® Falcon F5® locator and Vermeer Projects productivity tools. “Almost every company we work for wants documentation and it’s much more efficient to do it while we’re drilling than to send someone out afterward,” explained Stringer. “We use the locator to mark the bore path and record depths. After the data is collected, I upload it to Vermeer Projects on my computer and can quickly create a bore profile to share with customers either electronically or in a printout. I’m not sure why anyone would do it any other way.”

Up next
With every bore completed and documented, the S & J Contractors crew packed up its equipment and moved on to several projects happening in New Mexico. The team’s D100x140 S3 Navigator HDD and R250C reclaimer won’t be the only units working on all the upcoming projects Andrews has lined up there. “We are slammed for time and have a few river crossings lined up, so I reached out to Ray Miller again for help. Within a matter of days, he helped me track down a brand new Vermeer D220x300 S3 Navigator® HDD and a Vermeer R9x12T reclaimer. Now, we’ve got two HDD crews up and running.”

While it may seem that S & J Contractors have a lot on their plate right now, it’s nothing that Andrews and Stringer haven’t been through before. Experience has taught both of them that when things get busy, having the right people, machinery and tools makes a world of difference.

This article contains third-party observations, advice or experiences that do not necessarily reflect the opinions of Vermeer Corporation, its affiliates or its dealers. Testimonials and/or endorsements by contractors in specific circumstances may not be representative of normal circumstances experienced by all customers.

Vermeer Corporation reserves the right to make changes in engineering, design and specifications; add improvements; or discontinue manufacturing at any time without notice or obligation. Equipment shown is for illustrative purposes only and may display optional accessories or components specific to their global region. Please contact your local Vermeer dealer for more information on machine specifications.