This article was originally published in Underground Construction.

According to the U.S. Energy Information Administration (EIA), more than one-fifth of the nation’s domestically produced energy comes from Texas. The state has a long history of producing crude oil and natural gas, but more recently, the state’s energy production is rapidly expanding into renewables like solar and wind.

Renewable energy farms are being constructed all over the state. Companies investing in the construction of these mega wind and solar farms are enlisting contractors who have helped build reliable and efficient pipelines that transport oil and gas.

A familiar name to anyone who works in oil and gas, Hard Rock Directional Drilling, is now becoming the go-to HDD partner for renewable energy electrical installs. According to Cory Baker, general manager for Hard Rock Directional Drilling, Texas is a hotbed for renewable energy right now. The owners and the engineering procurement and construction (EPC) companies managing the projects need contractors familiar with the state’s ground conditions.

“We have oil and gas HDD crews working throughout the country, but most of our work is done in our backyard, and we’ve been able to plan and execute on some pretty unique jobs. Supporting the construction of wind and solar farms seems like the next natural step for our company, and we have already completed several large projects,” Baker said. 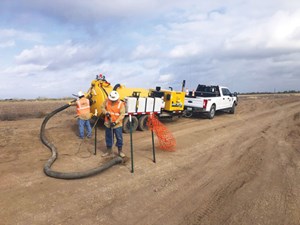 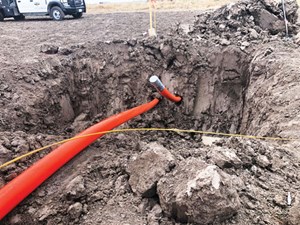 After deciding to expand into renewable energy, Hard Rock created a new division and enlisted long-time employee Cory Seago to lead the effort. As division manager for renewable energy at Hard Rock, Seago is responsible for bidding on new projects and managing the HDD crews performing the work. Seago’s first piece of business, though, was making sure his team had the right equipment for the job.

“Hard Rock has a massive equipment fleet – in numbers and size,” Seago explained. “However, for renewable energy work, we added three mid-size directional drills (Vermeer D40x55 S3) and a pair of Vermeer vacuum excavators (PDM850DT and LP855SDT), a pipe fusing machine and we built three drilling fluid mixing trucks. This fleet is dedicated to our renewable energy team, but if we need bigger drills, we certainly have plenty to choose from.”

With around a year under its belt, the new renewable team has already completed several large-scale projects, including helping to lay out the electrical grid for a massive new solar farm and a wind farm.

Hard Rock was one of the first crews on the Rayos Del Solar project scene that kicked off in November 2020, in southern Cameron County, Texas, near La Feria. The $91-million, 180-megawatt solar power plant will be one of the largest solar farms in the United States when completed in the first half of 2022.

Before a single pile was driven and solar panel installed, Hard Rock’s crews were onsite to complete approximately 20,000 feet of bores across the 2,000-acre plot of land.

“Like on oil and gas projects, what can’t be open-cut because of environmental concerns or existing aboveground infrastructure gets drilled,” explained Seago. “HDD was used to install electrical conduit under every river, creek, waterway, road and pipeline.”

In total, Hard Rock completed 88 drill shots; most were 330 feet or under, but almost a dozen exceeded 850 feet. Bores were designed in a rectangular pattern and usually included between four and five shots next to each other to support the rows of panels that would later be installed.

HDD work was one of the first phases of the job – even before trenching crews. Drill crews bored using GPS entry and exit points and pulled back 8-inch PVC fusible pipe. The trenching crews directly burying electrical lines in less sensitive areas would trench up to the entry points of the bores, pull the cables through and keep going.

While the bores were completed in rural areas, Seago said there were existing utilities that needed to be located before boring could begin.

“It may look like nothing’s out there, but we did spend time with our vacuum excavators potholing a few electrical and fiber lines, as well as pipelines that also pass through the area,” he said. “Once those lines were identified, we could get to work.”

Hard Rock crews used the D40x55 S3 rigs to complete all the bores, and Baker said it’s the ideal machine for the ground conditions and the distances they were drilling. “We know how challenging and ever-changing soils can be in this part of Texas,” he explained. “While the crews didn’t encounter a lot of rock, the area’s sticky clay also needed to be accounted for.”

Fluids run included a mixture of bentonite, a dispersant additive to help prevent clay particles from sticking to tooling, and an additive to help control clay swelling. Seago said crews went heavy on the flow, but the volume of fluid didn’t warrant bringing in a mud recycling system. Instead, crews used their 800-gallon vacs to remove spoils and disposed the spoils at a designated site that the EPC contractor established. 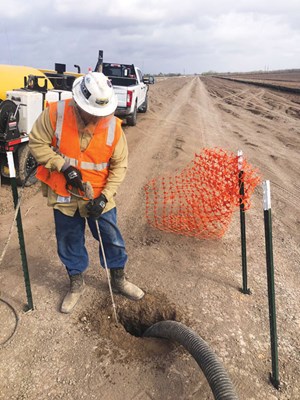 While the drill operator and locator drilled out on the pilot bore, other crew members laid out and fused pipe for pullback. Crews usually made one reamer pass, swabbed the path and then pulled back. Once the line was in place, they would cut the head off the pipe, use the vacuum excavator to suction any loose material, and place a line of 2,000-pound mule tape through the pipe to help the next crew thread electrical cable. Both ends of the pipe were then capped off and they moved on to the next bore.

On average, bores were between 4- and 5-feet deep, but would go down to 15 feet when crossing rivers and creeks.

The EPC contractor, PCL Construction Solar Division, was so impressed with Hard Rock’s work, it presented an award for Hard Rock’s commitment to safe drilling practices while exceeding the timeline agreed upon. These efforts helped keep the overall project on schedule, even while some of the other moving pieces fell behind.

The Reloj del Sol wind farm started producing power earlier this year and Hard Rock was once again one of the first contractors on the job. Instead of laying down a grid, Hard Rock’s team installed piping so all 63 wind turbines across 600 acres of land could be connected.

“The electrical installation work is relatively similar between solar and wind,” said Seago. “We’re just not doing parallel bores in a grid pattern.”

Baker also added that as far as he’s concerned, energy is energy, whether it’s oil, natural gas, wind or solar.

“As Texans, we have a lot of pride in being the nation’s largest producer of energy. It means we’re doing a great job of using the resources available to us, which includes the robust supplies of oil and natural gas under our land, as well as the sun that shines down and wind that blows across the state.

“Our role in the process is to make sure those resources get to where they need to go. And we’ll continue to serve in that capacity no matter what the energy source is,” Baker concluded.